WORM (Write Once Read Many)

What is WORM (Write Once Read Many)?

WORM (write once read many) is a term used for special, write-once data storage devices. These WORM cartridges can only be read with a corresponding WORM drive. Each WORM storage device has a unique, catalogued and unchangeable serial number, so that, when handled correctly, manipulation can be ruled out.

Up until recently WORM media were the only media, accepted as audit-proof by finance authorities (GDPdU (Principles on Data Access and Verifiability of Digital Documents), GoBS (Principles of DP-based Orderly Accounting / Bookkeeping Systems)). Nowadays other storage devices are accepted as well.

These WORM cartridges can only be read with the corresponding WORM drives. Each WORM data carrier has a unique, cataloged and unchangeable serial number, so that manipulation can be ruled out if handled correctly. For a long time, storage media based on the WORM method were considered the only legally compliant option for audit-proof archiving. Digital archiving of documents was therefore reserved for large companies that could afford the relatively expensive WORM technology. 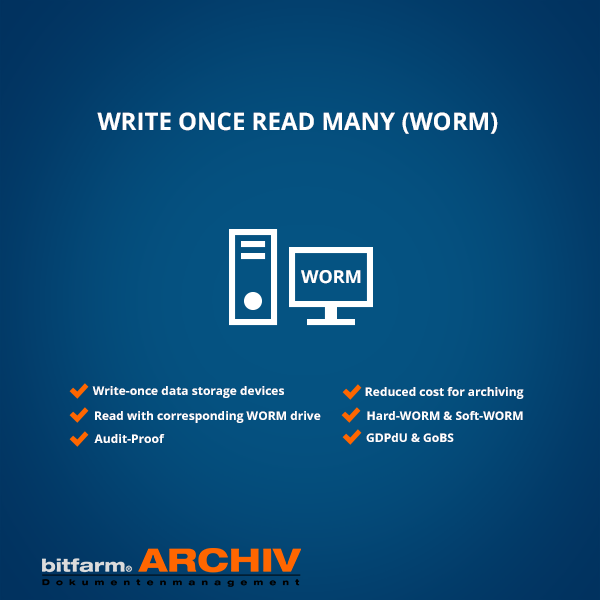 What is the importance of write once read many (WORM)?

Among other things by a statement (2005) of the tax authorities to the regularity of electronic accounting systems (GoBS) the exclusivity of the audit-proof storage on WORM data media was softened. The financial authorities expressly point out here that no specific data carriers are required for archiving. Rather, archiving can be carried out on data carriers of any type if audit security is ensured by software. Since then, many providers of archiving solutions have started to use less expensive data carriers such as simple hard disks for archiving and implement revision security within the DMS via software write protection. This is then often called soft WORM in reference to the WORM technology. In contrast, the real WORM drives and media are referred to as hard WORM. Other examples are referred as:

Unfortunately, initial legal regulations such as the GDPdU and the GoBS were relatively imprecisely held and interpretable. This led to the fact that in the 1990s certain lobby groups spread the opinion that audit-proof archiving was only possible with Hard WORMs. Fortunately, the financial authorities reacted to this in their statement of 2005 and again with the GoBD of 2015. They put a stop to playing on customers' fears and made it clear that other processes and data carriers are also suitable. As many modern document management systems now support soft WORM processes, the costs for digital archiving have fallen overall. This is one of the reasons why electronic document management has now also become the focus of attention for many SMEs and small businesses.